Posted on June 24, 2016 by recoverynetwork:Toronto

Its rarely a good thing when those with power and privilege give themselves more and always, of course, at the cost of those who already have less.

Whatever else the vote in UK means it does mean that a world in which younger people could live in hope of a better world than that created by preceding generations is now a smaller one.

That many young people will now have removed from them the possibility they can work and study and live  and make their choices about how and where to live their lives will be reduced from 28 countries to just one,and a rather angry and increasingly misanthropic one at that.

Early evidence shows that people bellow age 35 voted overwhelmingly for remaining – with all its faults.

Telling politicians to go take a long walk off a short peer is all the rage and totally understandable. It’s hard not to conclude that Mr G. Fawkes was on to something all those years ago.

Doing it for such short term gain and with such long term cost  and also removing life enriching possibilities from current and future generation is just really, really sad. The consequences of being robbed of hope and opportunity will be heavy.

A short term victory for small mindedness and poke-in-the-eye pissed off-ness will be paid for by younger people whose lives and prospects have been made smaller by those who chose to stick it to the man.

When the likes of Michael Gove and Donald Trump like something this much its hard to see it can be good thing.

Nice one.
and fuck you too. 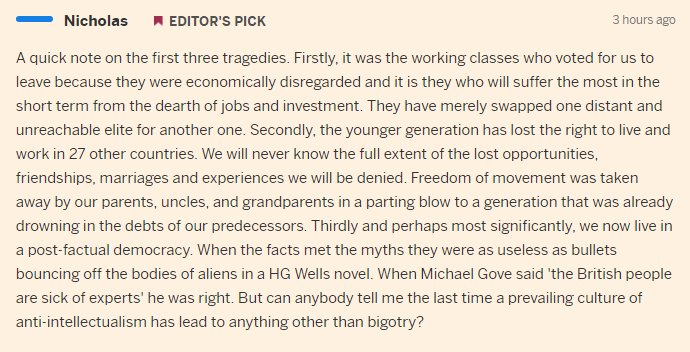 We believe people can and do recover from "mental illness" - because we are living it. We believe in the power of supporting each other: learning from and with each other. You are welcome to join us..
View all posts by recoverynetwork:Toronto →
This entry was posted in shit is f#cked and tagged Brexit. Bookmark the permalink.