likely the effects of a particularly powerful psychological trauma…

Posted on August 22, 2016 by recoverynetwork:Toronto 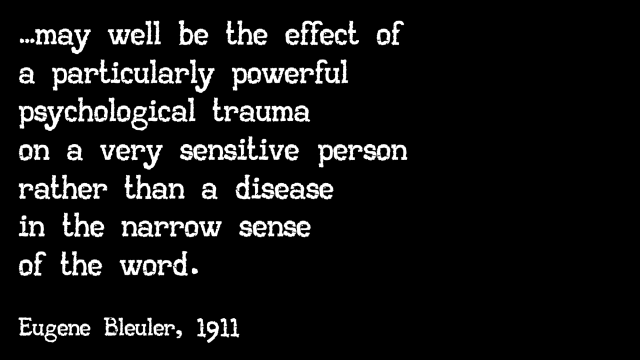 “may well be the effects of  particularly powerful psychological trauma”

These are the words of Eugene Bleuler when he first coined the term “schizophrenia” as a way of naming and understanding what he had been observing in patients in his care who had already been deemed without hope.

It is interesting how in the hundred years since the institutions of what has come to me termed  “mental health” have ignored and brushed aside the first part of this understanding and taken the second part directly to heart.

One hundred years on, the mercilessly constructed story that so pervades our culture now has it that “particularly sensitive individuals” have become de-human- ised and cast into the zone of non-humans as biologically defective wretched of the earth: “the mentally-ill”. Further, that what they experience is not “particularly powerful trauma” but the effects of their weakness deemed as some biological deficiency.

It is interesting how with only one hundred years of telling it that story has become so powerful that it has come to colonise our understanding of ourselves.  This systematically constructed lofty edifice of lies serves to deny what people like Charcot, Bleuler, Freud, and many others had been bringing to the fore a hundred years and more ago and that research is now demonstrating as undeniable fact.

Life experiences [can] leave us deeply wounded.
If we want to reduce serious mental illness then we must seriously address not just the effects of being wounded by our experiences but of the harm done by institutions institutions of psychiatry and those allied to it have for over a hundred years now, been part of systematically denying and reflecting from that, serving to protect those most culpable and blame those most vulnerable.

Psychological trauma- a term first used by William James only three years before Bleuler incorporated it into his understanding  –  leaves us with Thorns in The Spirit.

Bleuer and others intuited it a hundred years ago. We now, and for some time have known, that around 80% of people diagnosed with that cluster of life sentences called “serious mental illness”  have experienced serious adverse experiences in early years.

It is time to stop hiding the truth so we can find more compassionate ways of supporting those who have suffered long enough from the thorns left in their spirit.

From there we can begin to better enable and support people to find healing.

We believe people can and do recover from "mental illness" - because we are living it. We believe in the power of supporting each other: learning from and with each other. You are welcome to join us..
View all posts by recoverynetwork:Toronto →
This entry was posted in Emancipate yourself..., Trauma and tagged Eugene Bleuer, Healing, Psychological trauma, Thorns in the spirit, William James, wounded soul. Bookmark the permalink.