Stratford to Rio – Shakespeare as “treatment”

Posted on February 8, 2017 by recoverynetwork:Toronto

BBC News spotlight on the work of Vitor Pordeus and how he combines roles of art therapist and Psychiatrist,  using theatre to offer people new ways to explore states of mind, identity, role, and being in the world.

Lets face it gotta be a lot more fun and also offer a great deal more healing value than being offered nothing but sitting in a backless gown staring at a wall waiting for the drug trolley to come round again. 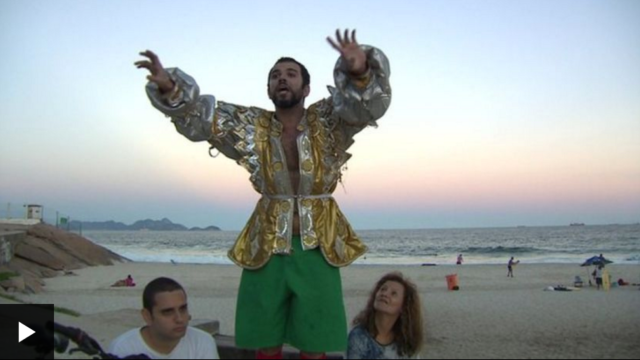 From Stratford to Rio: using Shakespeare to treat mental illness

Exploring feelings through playing different roles is recognised as helping people with mental health problems. And the theory has led one doctor to bring Shakespeare to Rio de Janeiro.

“Ser ou nao ser, eis a questao!” – “To be, or not to be. That is the question!” bellows a rugged, masked Hamlet, against the stunning backdrop of the Brazilian city’s golden Ipanema beach.

His fellow actors begin chanting Shakespeare’s famous words, before setting off in giddy skips, their faces in theatrical grimaces, around the circular stage.

These performers are not part of a professional theatre company. They are patients from the Nise da Silveira Psychiatric Hospital – many have diagnoses of severe schizophrenia and chronic psychosis.

Hamlet is played by Vitor Pordeus, an actor and mental health activist, who is also the patients’ doctor.

‘Now I can express myself’

Vitor says theatre is effective as a treatment for mental health conditions because it throws relationships wide open to debate.

“We can work on emotions, identities, family relationships, memories, cultural relationships. By exploring, reflecting, debating, we can decrease the power and mental weight of frightening thoughts and images lurking in a person’s mind,” he explained.

Vitor certainly isn’t the first to promote the idea that theatre has a therapeutic effect on mental health problems, and many recognise the benefits of drama therapy.

She explains that drama therapy allows people to play different roles that allow them to project different feelings and thoughts, and can act as a rehearsal for real life situation to aid reintegration into society.

He explains that Hamlet’s archetypical characters and exploration of states of mind are particularly useful for the actors – they allow the patients to project their emotions and to build up to roles in society.

Vitor’s collective, known as the Madness Hotel, rehearses in the grounds of the hospital where he works,

Caio, (not his real name), a patient who has long suffered from severe schizophrenia, says: “When I first got here I was in a really dark place but now I can express myself, and I just love singing and dancing. Theatre has helped me open my mind.”

His positive view of theatre therapy is echoed by many other members of the cast.

But Nadya Trytan explains that, in the US, the role of physician and drama therapist is usually played by different professionals; doctors prescribe drugs and assess physical progress in a more removed way.

Others have been far more critical, including those within Vitor’s own hospital.

He has been told his technique is overly simulating or agitating for the patients; others say his performing among them blurs and breaks down clear doctor-patient boundaries that patients rely on in times of need.

One of the biggest conflicts between Vitor’s approach to mental health treatments and that of more mainstream physicians is about the use of drugs.

Vitor openly admits that he has reduced his patients’ medication, shirking what he says are hideously outdated drugs prescribed to patients of the public health system.

But many say medicine must remain a central tenant of mental health treatments.

Dr Leonardo Palmeira, who runs his own clinic in Rio de Janiero where he specialises in schizophrenia, shares this view.

He does not dismiss Vitor’s work, but urges caution. “We have to be reasonable in our evaluation of available treatments: no single tool has been proven to cure mental health.

“The best results have come from a tailored mix of therapies – and theatre and the arts are a part of this complementary side of a broad spectrum of therapies. We should remember that theatre may not be for everyone.”

We believe people can and do recover from "mental illness" - because we are living it. We believe in the power of supporting each other: learning from and with each other. You are welcome to join us..
View all posts by recoverynetwork:Toronto →
This entry was posted in Uncategorized. Bookmark the permalink.
%d bloggers like this: