Why did I go Mad?

Posted on May 5, 2017 by recoverynetwork:Toronto

Why Did I Go Mad?

It starts us off in familiar territory, deep within the orthodox belief – the story that that people who hear voices have a thing called “schit-so-free-nya” because the brain in their head ‘produces too much dopamine’- but hang in there because it takes a turn and goes where maybe you think they wouldn’t dare go.

Things are changing- they did dare and they did go.

What if the story that if you hear voices then you have a thing called “schizophrenia” which means that the brain in your head “produces too much dopamine ” is not the only way to understand?

BBC Horizon is a “popular science show” and this episode illustrates how science is not about claiming power to claim to be be right in order to sell us stuff but is actually a process of exploration.

Having set out the current state of “treatment” at about 18mins in we get to go exploring. We get to see glimpses of where the the real frontier of understanding is: not where the lion’s share of research money goes – looking at neurons and brain chemicals to find more drugs – but exploring the meaning of difficult experiences; making new meaning; learning new skills; learning new ways of interpreting our world;  and yes using “new” understanding of how our brains constantly change to find ways we might aid our own brains to interpret the world in ways that can help make life worth living.

We see glimpses of some ways being tested for supporting a person using technology that can help them play key role in their own healing.

Data Sampling
One is with Richard Bentall, data sampling: “a form of electronic diary keeping” that focuses on “how a person feels in everyday life” and taking notice of the situations in which a person feels unsafe.

Rather than the clinician use their power to diagnose and prescribe the person gets a phone app to collect their own personal data.

This to aid in noticing, naming and making sense of their own patterns of experience and that also helps them bring hard data, personal information into a therapy session so that the two people can explore and work with it together.

Avatar Therapy
Second we see a glimpse of “avatar therapy” that maybe has potential to help a person practice new ways of relating with a shitty voice a person might find disempowering to find and build both new skills and confidence.
In both cases we see not new approach but really quite old approaches that are being augmented by adding technology which might make them more appealing and sciencey seeming, for a bit more on “data sampling” kind of approach see Jim van  Os’ TEDx talk [here].

These are not the quick fixes or invasive technology-insertion common to allopathic [ie western] medicine but tech-enabled approaches that, done skillfully by the therapist, can assist in enabling a person to find their power to act in their own lives.

They are adaptions of approaches people have been using themselves or supporting each other in for some time. For example that “avatar therapy”  is a tech-laden version of an approach that can also work with a friend you trust and finger puppets you’ve made with craft and even dollar store store supplies. You may not need the technology nor need to wait for a professor of psychiatry- or even a therapist- to assist you but if you feel you do then it’s good to know some are learning how to work with approaches like these.

Voice Dialogue
At the end we also have a glimpse of voice dialogue as “therapy”. An adaption of an approach devised by Hal and Sidra Stone – which they say is ‘not a therapy’, perhaps best not practised by a therapist , but like any other it kinda depends on the therapist, and so we get to see Rachel and one of her “Not Yets” in voice dialogue with Dirk Corstens.  The aim is to better understand eth relationship between “voice” and “voice hearer” in ways that might lead to improving that relationship.
Dirk: “Our experience and research shows that if you only suppress your voices then they become stronger”

For those who do want to choose the path of exploring and changing their own difficult experiences and learn to live with whatever they do live with, the options are increasing. We need to make them more available.

This 56 minutes shows us that the best most useful hypothesis is:
This crazy shit might just work
let’s give it a go – and see what happens.
Especially if you find  he stuff you’ve been offered so far doesn’t “work” for you.

Its not easy- but then anyone who tells you it is easy is lying out their bumhole.

We see it is very possible to explore our experience and make meaning out of even terrifying experiences and new approaches to support an individual in their process. 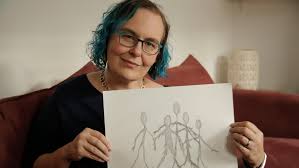 arn a few simple tips on how we might find cunning ways to have professionals not ask us [yet again!] those invasive questions we’re not ready to answer, or because there isn’t an answer,  or we know they wont understand or because it’s just too bloody , you know…
like Rai’s “The Not Yets”.

Once the dopamine fog clears it’s good to see find information being presented about how adverse experiences especially in early years leave us many times more likely to struggle in adulthood in ways that we find ourselves being told we “have psychosis”.

For example, David Strange gives us a vivid portrait of some of his frightening experiences and how he feels his life is constantly under threat,  he cheerfully shows us his “drugs for the night” later we also find out how he’d been violently bullied in his childhood.

“Having psychosis is like this, being continually frightened and scared all the time.”

“Having psychosis is like this, being continually frightened and scared all the time.”

Swaran Singh:
And, even more rare at about 40mins we some on how it’s not just stochastic shock type of like experiences that can lead us to place but that where we live can  have a huge impact also finding ourselves trapped disconnected and disempowered unable to escape pernicious, soul-crushing, life-sapping environments where we are dehumanized and marginalized.
For instance around city dwellers are more likely to be diagnosed. Beyond urban living our ethnic background affects our chances – around the world “migrant populations” have higher rates of diagnosis than the “host populations”.

As Swaran Singh tells us,

“what these groups have in common is social discrimination and adversity”. There is something about  “social defeat”, “repeated experiences of marginalisation, exclusion, and discrimination”.

This also happens when, for instance we move schools, the more times we do it the more likely we are to end up diagnosed.  We “leave behind our support network and start again,  as an outsider”.

“That chronic experience as an outsider is, we think related to development of psychosis” .

That chronic experience as an outsider is, we think, related to development of psychosis.

Traumatizing experiences have a powerful impact.

Jacqui Dillon takes us to a neighbourhood that holds some “terrible memories”. There is strong evidence linking childhood abuse with a range of diagnoses.

Richard Bentall talking with David: “Dissociating is a way of handling threat. In a situation when you cant escape, it’s a way of escaping” David shares how from age of four or five to thirteen lived in constant fear of one of the adults supposed to be caring for him launching a brutal attack. “The atmosphere at home was terrifying” and would “pretend not to be there”.

Then we come to the nub of the problem for us as a society, when in conversation with David Robyn Murray, having told of the dangers to health of long-term use of the drugs,  tells David:

“The medications you are taking are much cheaper than psychological therapy”.

“Psychosis has many names but research suggests it’s primarily the brain’s response to [traumatic] events.”

If, for no other reason then choose to watch this because we get to see a very cool thing about hearing voices that is often overlooked – how it’s an example of doing things very differently. Like how leadership comes from not only of people who hear voices but also from awesome women: Rachel Waddingham and Jacqui Dillon, Eleanor Longden are all featured.

Thank you all – and thank you David Strange too.

The future is coming to what we currently called “mental health services” too.
It won’t be perfect but we get a glimpse hear of a few steps we can take now.

If you’re ready for a glimpse of what it can be like if only we choose to let it, then spend an hour of your life watching this.

BBC info page: Why Did I Go Mad
If you’re in UK you may be able to watch it here:
http://www.bbc.co.uk/programmes/b08pltgy

We believe people can and do recover from "mental illness" - because we are living it. We believe in the power of supporting each other: learning from and with each other. You are welcome to join us..
View all posts by recoverynetwork:Toronto →
This entry was posted in Difference and Diversity, Healing, hearing voices, skin I'm in, Trauma, Trauma and tagged hearing voices, mad. Bookmark the permalink.
Loading Comments...