Posted on December 18, 2017 by recoverynetwork:Toronto

Excellent piece by CBC Radio, an edition of always excellent White Coat Black Art showcasing and exploring the role of peer support and a fine example of how it can work from North Bay, Ontario.

The best of it is the 30 min podcast itself, here:
http://www.cbc.ca/radio/popup/audio/listen.html

It does a great job of portraying just how overwhelming, disempowering and frankly frightening a human experience it can be to encounter MH services – just at a time when we’re already feeling our most overwhelmed and powerless and frightened, in short when we’re already least equipped to deal with what we can, all too often, find there…

It also does a good job of portraying the all too common attitude in such places, where staff too often feel exhausted and hemmed in by “the system”, and the trenchantly defensive routines that develop in any workplace when staff are badly treated. The unspoken attitude is given incredulous voice [and even hammed-up a little for dramatic effect] with: of how a person without professional training and, and a person with diagnoses [and especially that diagnosis!] can be allowed in here, let alone play a useful role rather than create mayhem and havoc.

He speaks to his own experience of having been many times to ER on the receiving end , the difficulties he experienced , the uncomfortable power dynamic, many staff felt they were

“above me, better than me”.

Now ’tis only a few years ago that peer support was being heralded as miraculous, and  being seen as novel and dangerous – you’ll hear it here show-host Brian Goldman, an experienced ER Doc,  stops the tape with a guffaw to express astonishment that is still common in such places..

[if you’re not familiar, the basic premise of the show is that it tells tales of what goes on, because its important that someone does and that what goes on in medical institutions is something we do need to talk about.]

Particularly, important is the part of the conversation about how this couldn’t just be put-in anywhere and expected to work, it takes things to be in place already.

We hear from the Triage Nurse Leeanne Nesbitt how she sees the contribution made by Peer Navigator, Chris…

“I think its invaluable, provides so much support to those who come in and to us as Triage nurses and the emergency room nurses.”

And we hear from the Emergency room physician Dr Erica Buck:

“So much of healing comes from human connection.”

She even quotes Rumi – “where there’s a wound the light comes in.”
“Yes expertise and our knowledge and our skills are vital, but
human connection is deeply human in another way.”

Recognising that what he’s witnessing is perhaps not commonplace the  interviewer steps in and invites a reality check:

“In a busy emergency department that human connection can be hard to come by.”

“It can be overwhelming, I wish I had more time”

Peer Supporters do not have magic faerie dust…

There are plenty of examples where it has just been ‘put in’ and didn’t work and isn’t working. Like the lightbulb, services, and those working in them have to both want to change and be ready to change.

There have been – and are – many more examples  of people being given a title “peer worker” peer specialist”  and led to believe that simply by dint of their existence -and perhaps by breathing – that they are going to single-handedly transform a whole health system.

Sadly, when they start many find themselves confronted with cold harsh reality familiar to many who have found themselves occupying the bottom rung of a tired, rigid hierarchy in a broken system, and a sick workplace: being bullied, gaslighted – stigmatized and frozen-out: marginalised by colleagues and left without support from managers.
Indeed many of these situationsinto which people enter with such hope so resemble the very worst kind of situations that so pressure human souls that they come to struggle in such ways that get deemed “mentally  ill” in the first place .

Inevitably many become exhausted, sick and leave and many give up and go to college so they can get more credentials so they can start further up the ladder in hope of escaping some of that institutionalised crap.

Many more do soldier on alone, driven by their conviction in their work even in face of every-day evidence that the system, as a whole is not ready for them and is a long way from taking their contribution seriously.

Of course, there are places it can work, and work now. There are a small few examples where it is working,  where the environment already places a strong focus on bringing humanity to services, on listening, on creating space and supporting the person struggling in identify their own needs and help them meet them rather than insisting on being right and knowing what they need.

The story here of how its working in one ER in North Bay is excellent example for how it can work and some of what it takes for it to work:   individuals prepared to bring their humanity to the fore and use that to make space in which their professional knowledge skills, expertise can work.

There are plenty other places where there is much work to be done before it can.

In the end “peer” means “equal”.
It does not mean:

“I have the answer”

“I’ve struggled too/  I still do struggle in this world. “

“I am finding my way, I believe you can find yours too”


To borrow a phrase from Pat Deegan at its core, it’s about :

“Putting the human back in human services.”

And in that there is a role for everyone to play their part and bring their humanity to et fore.

Marcelle Lallemand believes that the quiet intervention of Chris Fontaine saved her life.

Lallemand was brought to the emergency department of the North Bay Regional Health Centre in handcuffs after what she calls “a big show on Main Street.”

“I was handcuffed to a bed, alone in a room,” she said. “Police were outside laughing about me and making jokes and waiting for me to calm down, but their remarks and the way they were addressing me, I was just getting more angry and more in crisis.” 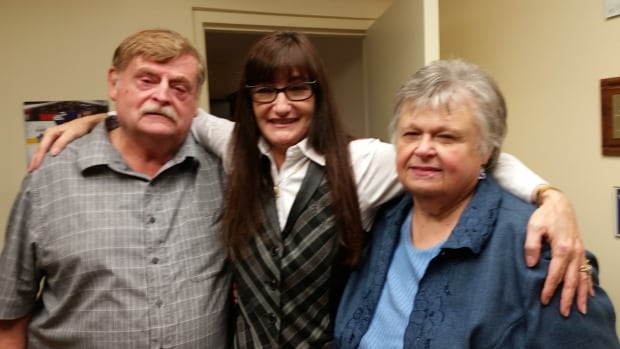 Sitting alone, humiliated by her public arrest, Lallemand felt herself spiralling out of control, losing hope.

“I was praying and I was asking Jesus to come and save me. I had no hope and then Chris arrived.”

Chris Fontaine is a peer support navigator, someone with lived experience with mental health issues. In Chris’ case, he made many trips to the ER in his early 20’s, when he struggled with what was later diagnosed as borderline personality disorder and dysthymia (long-term mild depression).

Now in full recovery, Chris studies psychology while working for People for Equal Partnership in Mental Health Nipissing (PEP).  One of the country’s oldest peer-support organizations, it’s been offering services to those suffering from mental health and addiction issues for more than 26 years.

I think the peer support worker is fixing the downtime, the period between assessment and admission. Chris is giving that downtime significance by justifying the patient’s needs. Keeping them calm…so nobody’s ever left alone. You feel like you have a supportive person at your side.– Leeanne Nesbitt, triage nurse

“Between my education and my own personal experience, I can kind of provide strategies for coping with day-to-day struggles dealing with the symptoms of mental health issues.”

Chris remembers his own experiences in ER waiting rooms without peer support workers as “terrifying.”

“There was definitely that uncomfortable power dynamic where whoever I talked to, I felt like they were above me or better than me, and that made it a bit difficult. That’s a big part of why I had to keep going back as well,” he said. “I wasn’t able to really connect with an individual and feel comfortable with what I was dealing with or understand that it was something other people struggle with too.”

Emergency departments can be intimidating and overwhelming environments. Doctors are often in a hurry, and the wait times are long. Letting the patient in crisis know they are not alone is the entire point of peer support, according to Deborrah Sherman, executive director of the Ontario Peer Development Initiative (OPDI).

“The basic tennet of peer support is saying ‘I’ve been where you are’,” Sherman said. “I’ve been through it. I’m doing okay. What can I help you with? How can I encourage you? How can I support you?”

Sherman said peer support workers are not interested in making a diagnosis. They aren’t there to cure or treat any ailments but rather “to provide hope and to exemplify that people do and can recover. That you’re not alone and that there are far more people with issues than you might know about.”

At North Bay Regional Hospital, Fontaine is embedded with the triage staff — having access to patients as soon as they arrive. 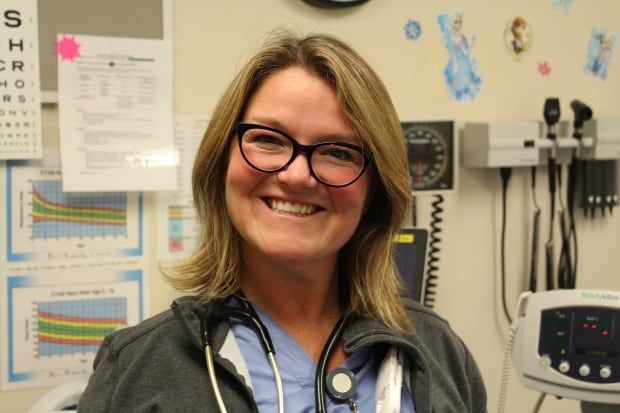 “I think it’s invaluable,” said Leeanne Nesbitt, a triage nurse who works with Fontaine. “I think Chris provides so much support to everybody that comes in and even us, as triage nurses and the emergency room nurses.”

When a patient is identified as needing mental-health support, they are brought to a more comfortable private room. A little while later Fontaine arrives to ask them how they are feeling and allows them to express their concerns.

The healing power of human connection

Chris dresses casually: Street clothes, big baseball cap, spacers in his ears. That helps too, he says. “Sometimes it can be difficult to talk to somebody about what your concerns are, what your needs are, especially if they’re a nurse in scrubs or a doctor with their clipboard. It can be a little intimidating, so sometimes we can get extra information that is useful for their care as well.” 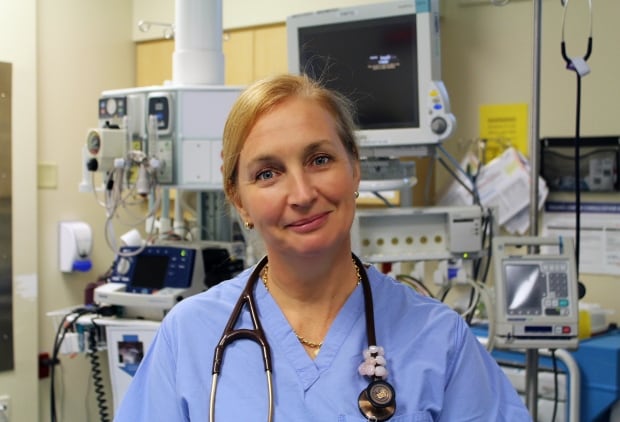 ER doctor Erica Buck values the lived experience that peer support navigators like Chris bring to the team. “When one’s been wounded you have something more to share,” she says. “They automatically, because of their shared experiences can relate to a patient and make a patient feel at ease. Human connection is deeply healing.”

And for Lallemand, that extra care provided by Fontaine was crucial to her recovery.

“For sure Chris has saved my life that night.”

We believe people can and do recover from "mental illness" - because we are living it. We believe in the power of supporting each other: learning from and with each other. You are welcome to join us..
View all posts by recoverynetwork:Toronto →
This entry was posted in Healing, Ideas, peer support, Stigma begins with D, Trauma, woundedness and tagged North Bay, Ontario, peer, PEPplace, Rumi. Bookmark the permalink.
Loading Comments...