Posted on December 9, 2018 by recoverynetwork:Toronto 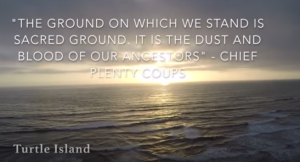 Many think that the movement at Standing Rock has come and gone, not knowing that was only a wake up call to what is happening around the world!

Indigenous people continue to lead the fight against big corporations who only wish to profit at the expense of the people’s well being in the fight for clean water.

In 2017 Taboo of the Black Eyed Peas pulled together some amazing Indigenous artist on a song and video titled “Stand Up” (For Standing Rock) which went on to win an MTV VMA award which veteran Native emcee Supaman was a part of.

The fight continues in this hard hitting visual masterpiece where Supaman teams up with grammy nominated Maimouna Youssef from the Choctaw nation to inspire, educate, motivate, and encourage those still standing in the global fight to clean water.”

We believe people can and do recover from "mental illness" - because we are living it. We believe in the power of supporting each other: learning from and with each other. You are welcome to join us..
View all posts by recoverynetwork:Toronto →
This entry was posted in Life, music. Bookmark the permalink.
Loading Comments...