Posted on September 25, 2019 by recoverynetwork:Toronto

Love “One flew Over The Cuckoo’s Nest” ?
Want to see the remarkable story of how this remarkable movie was made?

Watch the movie [87mins] then join in with a bit of a dialogue after.

This event is brought to you by Community Partnership between:

In partnership with Recovery Network: Toronto, ISPS-US, and the Centre for Comparative Literature, the Guattari Research Group – Toronto is screening Completely Cuckoo, the making-of documentary of One Flew Over the Cuckoo’s Nest, on Tuesday, October 8th, at 7:00pm in VC 323. The GRG – T is dedicated to investigating the work of Félix Guattari and its many different applications, interpretations, and mutations in various contexts within and beyond academia.

This is our inaugural “Guattari Goes to the Movies” crossover event with “Mad for Movies”. We’ve organized this screening in solidarity with Toronto communities in hopes of cultivating an open conversation about how we see our and others’ experiences and mental wellness. For more info about our community partner, Recovery Network : Toronto, and a short review about the documentary, please click the following link: https://recoverynet.ca/2019/09/25/completely-cuckoo-7pm-tue-8th-oct-2019/.  We will have a short introduction and then a discussion after the film. All are invited and we hope to see you there! 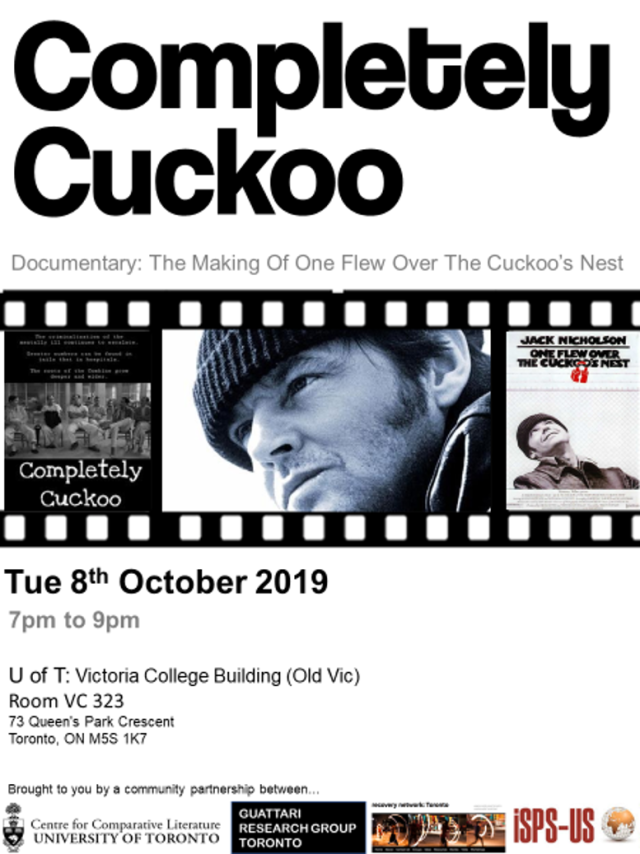 “It was hard to discern who were the actors and who were the inmates,” says Christopher Lloyd of his time spent filming 1975’s Academy award-winning One Flew Over The Cuckoo’s Nest. It’s hardly surprising. As revealed in Charles Kiselyak’s excellent and often very funny feature-length documentary, we learn that the filmmakers and 89 mental patients effectively lived and worked together as one while shooting in a real-life psychiatric hospital in Oregon.

Viewers may detect a trend here: Merry Prankster Ken Kesey’s source novel had been written on the night shift in the ward of a Californian mental institution, while the author was high on Peyote, as a diatribe against what he coined “Bull**** consciousness” – the patients’ mental state, he believed, was a natural reaction to the soul-sapping insanity of corporate America and “institutionalised evil”. As Kesey, who clearly identified with his Goliath-baiting protagonist RP McMurphy, says, “Not only was I writing about these guys with twisted consciousness – but I had joined their ranks.” Years later, following a Kirk Douglas-starring stage adaptation and numerous knock-backs from queasy Hollywood execs, director Milos Forman would apply the same Dunkirk spirit to his movie, aided no end by a remarkably progressive administrator, Dr Dean Brooks, whose residential psychiatric hospital provided a location for cast and crew, and who insists the film-making process was a useful aid to his patients’ rehabilitation.

And it’s here that the real meat – and real heroes – of Kiselyak’s film begin to emerge. If leading man Jack Nicholson (absent here) described McMurphy as “a cross between Hamlet and Jesus Christ” in his Oscar acceptance speech, the people behind the cameras, including producer Michael Douglas and screenwriter Bo Goldman, reveal themselves to be no less unusual. All of which makes for a warm, and most moving hour-and-a-half.

We believe people can and do recover from "mental illness" - because we are living it. We believe in the power of supporting each other: learning from and with each other. You are welcome to join us..
View all posts by recoverynetwork:Toronto →
This entry was posted in Event and tagged Completely Cuckoo, cuckoo's nest, One Flew Over, Oscars. Bookmark the permalink.
Loading Comments...