Posted on November 25, 2011 by recoverynetwork:Toronto 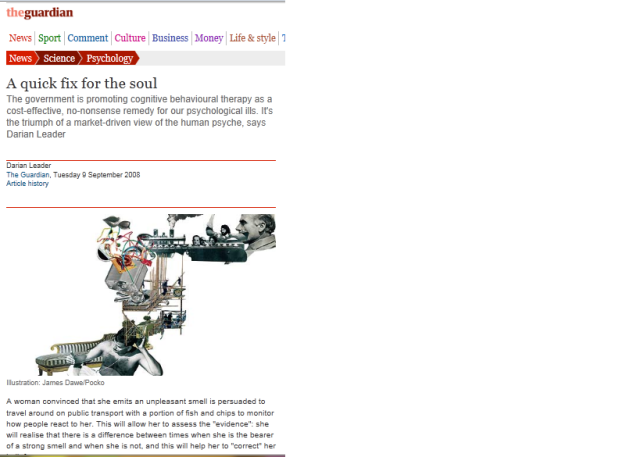 There’s a growing body of evidence that many people find CBT helpful for unpicking complex emotional knots and retraining their own habits of thinking.

There are also a growing number of folks touting CBT as the new cure all for mental health problems- and  in exactly the same way that the big pharma they might criticise sell their little pills, and like the snake oil salesman sold that snake oil.

Yes it’s a long tradition of folks claiming they know best selling us stuff because they wanted to sell it.

CBT can be useful but let’s stop pretending it’s the new magic pill because there isn’t one.

And the language of CBT might evolve some more from its own automatic thinking – it still betrays it’s roots in correcting errant behaviour and coercing compliance: “correcting” thinking “errors”, for instance.

Many experience CBT as unhelpful too –

“my therapist is correcting my thinking for me”,

“my voices are telling me this is bullshit”

So come on – CBT can be useful, and it is getting better but let’s stop treating like it’s some kind of new magic bullet that kills all vampires.

And lets stop selling it like it’s the new universal fix all snake oil .

This is not so that a  new model army of snake oil salesfolk can jump into the market void but so we can create space to be more human: to connect, to learn and to be.

Whatever it is we try it ce.an work somewhat for some people for soem of eth time
Whatever we do is not a fix for everything that’s awry in my life – because there isn’t one
And whatever we might do that works for us, it cant be the one thing we do – because nothing can be the one thing.

Like anything else, CBT is but a “tool” – a thing we can use to help us do what we decide we need to do –  and as always it’s the person using the tool and how they use it that makes the difference.

CBT is a thinking tool – or kit of tools if you like – it’s the person that does the work.
Often strikes me that’s it be a lot more useful id we took some of the therapizing away and called it what it is CBToolkit

For a great article in UK Guardian by Darian Leader on how, just like here, CBT has being promoted in UK as the latest cure-all for all that ails of the psyche / soul.

… and some of the perverse behaviour that some therapists have their clients engage in, all in the name of “therapy” – like travelling on transit with a fish strapped to the chest to gather “evidence for” , “evidence against”  …

…you really couldn’t make this stuff up…

We believe people can and do recover from "mental illness" - because we are living it. We believe in the power of supporting each other: learning from and with each other. You are welcome to join us..
View all posts by recoverynetwork:Toronto →
This entry was posted in Emancipate yourself..., Ideas, medication madness, The Mad Ones and tagged black friday, sale. Bookmark the permalink.
Loading Comments...