The Maniac in Me – Daniel Smith

Posted on May 24, 2012 by recoverynetwork:Toronto

The Maniac in Me

My brother Scott and I talk about anxiety the way some brothers talk about money, which is to say often and always with an eye on who has more of it. We aren’t really in competition, however: our anxieties are different breeds. Mine is cerebral. It starts with a thought — a what if or a should have been or a never will be or a could have been — and metastasizes from there, sparking down the spine and rooting out into my body in the form of clamminess, fatigue, palpitations and a terrible sense that the world in which I find myself is at once holographically insubstantial and grotesquely threatening. On more than one occasion my anxiety has paralyzed me over something as inconsequential as the choice between blue cheese and vinaigrette on a salad.

Scott’s anxiety is more physical. It starts with a twinge or an unaccustomed tightness and then rises to his mind, which, in the natural process of investigating the sensation, magnifies it, instigating a feedback loop that ends with Scott either curled up on the couch with a jar of Nutella and a sack of soy crisps or strapped to a gurney in an ambulance, being rushed to the cardiac unit for a battery of tests that invariably reveals nothing more malignant than a few gas bubbles. In short, Scott is a hypochondriac.

Scott and I sometimes argue about the relative demerits of my “free-floating” versus his “somatic” anxiety. But mainly we commiserate. We exchange strategies, and we test pet theories on each other. And so it was on a recent visit, when our conversation turned to the genesis of my anxiety.

We were in Scott’s kitchen. He was starting dinner for his family, scraping minced garlic and onions into a cast-iron skillet. The smell of sautéing aromatics is a kind of natural sedative, an airborne Valium. It loosens the tongue. I spoke for a long while about all the things I thought might have caused my anxiety — in particular the traumatic way I lost my virginity (16, two women, bong hits). When I finished, Scott gave the pan an expert toss and said, in the tone professors use with their least-perceptive students: “Jesus, Dan. Maybe. I guess. But listen, it’s not like we were raised by Buddhist monks.”

There are two things to say about this statement. First, contrary to popular belief, Buddhists can actually be very anxious people. That’s often why they become Buddhists in the first place. Buddhism was made for the anxious the same way Christianity was made for the downtrodden or A.A. for the addicted. Its purpose is to foster equanimity, to tame excesses of thought and emotion. The Buddhists have a great term for the mental state these excesses produce. They refer to it as “monkey mind.” A person in the throes of monkey mind suffers from a consciousness whose constituent parts will not stop bouncing from skull-side to skull-side, flipping and jumping and flinging feces at the walls and swinging from loose neurons like howlers from vines. Buddhist practices are designed to collar these monkeys of the mind — to pacify them. Is it any wonder that Buddhism has had such tremendous success in the bastions of American nervousness on the West Coast and in the New York metro area?

The second thing to say about Scott’s admonition is that I never realized how influential our upbringing must have been. It seems incredible, because it’s obvious. We were raised by two anxious parents. My father’s anxiety was as different from my mother’s anxiety as Scott’s is different from mine, darker and more complicated. But it was there, sometimes in force. In his early 40s, my father had a series of panic attacks that sent him packing to the behavioral ward. My mother, meanwhile, was struggling to make it through P.T.A. meetings without hyperventilating herself into unconsciousness. And still I didn’t realize.

Did I have intimations? When I was 13, my mother, whose anxiety led her to seek training as a therapist, began to see patients at home, in a large, low-ceilinged room on the bottom floor of our house. One afternoon, I sneaked into her office and defaced the first few business cards in the pale porcelain dispenser she kept on her desk. The cards, of which she was very proud, read:

When I was through they read:

But this was more an act of mischief than of understanding. I had no real knowledge that my mother’s therapeutic work grew out of her therapeutic needs. I had no real knowledge that there was anything to her temperament but her — the maternal constant. Anxiety has many signs: ragged nails, gnawed cuticles, sweaty palms, excessive blinking, the inability to sit still. All the things the monkey does when he’s in command. But you have to know what to look for. And even if you do know, you may not find anything. The more practiced anxiety sufferers are adept at the art of subterfuge. For the sake of propriety, ambition, desire or privacy, they learn to seal their anxiety off from public view. They learn to cork their anxiety within themselves like acid in a vial. It isn’t pleasant. The human mind isn’t Pyrex; it can corrode. But it works, for a time.

When I went away to college, I began to see that there were two types of anxiety sufferers: stiflers and chaotics.

Stiflers are those who work on the principle that if they hold as still, silent and clenched as possible, they will be able to cut the anxiety off from its energy sources, the way you cinch off the valve on a radiator. It isn’t hard to spot a stifler. They tend to look haunted and sleepless, like combat veterans, and they are more likely to chain-smoke and pour themselves a drink within five minutes of getting home from work.

Chaotics, by contrast, work on no principle whatsoever. Although chaotics are sometimes stiflers when alone, when they are around people, and especially in tense interpersonal situations, they are brought into a state of such high psychological pressure that all the valves pop open of their own accord, everything is released in a geyser of physicality and verbiage, and what you get is a kind of shimmery, barely stable equilibrium between internal and external states, like in those rudimentary cartoons where the outlines of the characters continuously squiggle and undulate. Sometimes laymen interpret the behavior of chaotics as emotional honesty, but it’s almost always involuntary. Chaotics are merely stiflers with weak grips.

At 18, I wanted very much to be a stifler. Partly this was out of pride. It seemed shameful to panic when everyone else was gleefully snorting Ritalin and peeling off one another’s clothes. Partly, however, it was because college radically restricted my ability to panic. In the existential sense, college may expand life’s possibilities, but in the flesh-and-bone sense, it narrows them. College throws you into cramped living quarters with people you have never met but whom you have no choice not only to endure but also to shower with, brush your teeth alongside and defecate not three feet from. After close to two decades of cohabiting exclusively with parents and siblings, this shift can cause a fair amount of psychological friction. This is particularly true because in freshman dormitories it is something of an imperative to present yourself as poised and confident, even if you are in fact bilious, angst-ridden and actively decompensating.

In these conditions, I didn’t have what it took to be a stifler. I tried. How I tried! In those first weeks away, my circumoral muscles got a serious workout, what with me grinning anytime someone so much as breathed in my direction. I didn’t realize how disturbing the grin must have been to my new classmates until late one night I tried it out in the mirror. I looked like Charles Manson at a parole hearing. My other efforts presumably didn’t come off much better. There was, for example, my voice. I did my best to pitch it somewhere short of hysterical, but I could never pull it off. The problem was that the thicket of muscles that connect the head to the shoulders were, in my case, perpetually clenched — a condition that, had I weighed more than 120 pounds at the time, might have made me resemble a villain on the pro-wrestling circuit, playing to the crowd. Instead I looked and sounded like an enormously ugly girl at a Justin Bieber concert.

……..To be anxious wasn’t shameful; it was a high calling. It was to be alive to life’s contradictions, more receptive to the true nature of things than everyone else. It was to be a person who saw with sharper eyes and felt with more active skin. 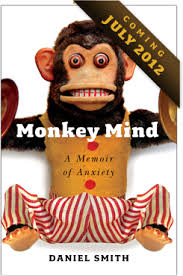 This was — I did not yet know this — an old idea. It was also a trap. Kierkegaard once claimed that anxiety is our “best teacher.” He was correct, to a point. By underscoring the tensions in our minds and goading us to action, anxiety does indeed teach us. But as the chronic sufferer discovers, the best teacher is not anxiety itself but the ceaseless, lifelong effort to think clearly and act well in spite of it. To do that you need certain qualities — the ones my brother Scott isolated in his book of wisdom: simplicity, mindfulness, pragmatism, stoicism. It would take me 10 years, six therapists and countless hours of self-torment to see this.

“Daniel Smith is the author of ‘‘Monkey Mind: A Memoir of Anxiety,’’ which will be published by Simon & Schuster in July. This article has been adapted from that book. Smith teaches English at Bryn Mawr and the College of New Rochelle.”

We believe people can and do recover from "mental illness" - because we are living it. We believe in the power of supporting each other: learning from and with each other. You are welcome to join us..
View all posts by recoverynetwork:Toronto →
This entry was posted in anxiety, my story, The Mad Ones and tagged Anxiety, Buddhism, Health, mental health. Bookmark the permalink.
%d bloggers like this: