Brain Power: from neurons to networks

Posted on November 22, 2012 by recoverynetwork:Toronto 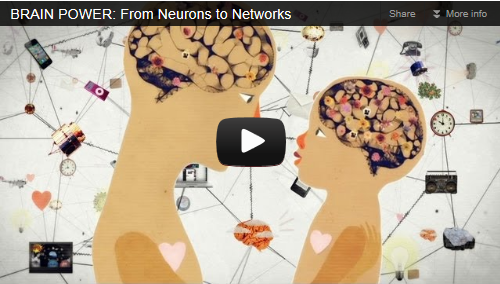 Your brain is constantly changing, adapting to whatever happens around it.

Everything you experience makes connections in your brain, reinforcing existing pathways or making new ones. Like a newly trodden path agross a grassy field those new neural pathways  become stronger when they are used again. That’s how we learn new stuff. It’s also how we  develop new habits, leaving the old ones buried in old neural networks to weaken and whither [eventually], still there but gradually less and less insistent, less nagging, having less of a grip on us.

So the really good news is that even if our brain has gotten into a bit of a jumble we can learn and we can help even an old dog of  brain to learn new stuff.

Neurons that fire together wire together, so get firing those neurons.
Reading this is changing your brain, right now. Watching this ten minute  movie will change it too.
Brain Power: From Neurons to Networks compares how your your brain works with the internet, neural connections are similar to hyperlinks, if you keep clicking the sme links they get stronger, but you can make new ones and make them strong too.

And when it’s all getting a bit too much you can also give your brain a break.

….and like anything that can be tricky at first but with practice, your brain will get the hang of it.

Its what your brain does: change.

Directed by @tiffanyshlain Please share this film far and wide! Suggested ways below. Check out the #TEDBook that accompanies this film. Info at: http://www.letitripple.org

BRAIN POWER: From Neurons to Networks is a 10-minute film and accompanying TED Book (ted.com/tedbooks) from award-winning Director Tiffany Shlain and her team at The Moxie Institute. Based on new research on how to best nurture children’s brains from Harvard University’s Center on the Developing Child and University of Washington’s I-LABS, the film explores the parallels between a child’s brain development and the development of the global brain of Internet, offering insights into the best ways to shape both. Made through a new crowd-sourcing creativity process the Moxie team calls “Cloud Filmmaking,” Brain Power was created by putting into action the very ideas that the film is exploring: the connections between neurons, networks, and people around the world.

We believe people can and do recover from "mental illness" - because we are living it. We believe in the power of supporting each other: learning from and with each other. You are welcome to join us..
View all posts by recoverynetwork:Toronto →
This entry was posted in Ideas, neuroplasticity and tagged learn, network, neuron, Neuroplasticity. Bookmark the permalink.

1 Response to Brain Power: from neurons to networks