how medicines are marketed

Posted on June 10, 2013 by recoverynetwork:Toronto 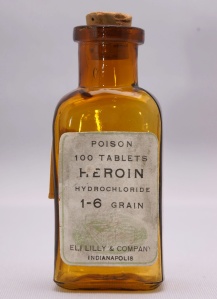 A wonderful look back in time -from io9.com -to the days when marketing pharmaceuticals was much more innocent.
Travelling snake oil salesmen criss-crossed the land twixt town and city, peddling their wares to  convince you and me  that their poisons were worth taking because they could make us feel better.

Note the word at the top of the label – and the name at the bottom. They used to openly declare that the contents were poison.

The snake oil salesmen were outlawed. Those who made the poisons became the world’s richest multi-national corporations and their salesmen organsed, formed colleges and became Doctors.

In the US today  for instance,  there are more pharmaceutical industry lobbyists in Washington than congressmen; and one travelling drug company rep for every fifteen physicians.
[Interestingly in Toronto the ratio of mental health workers to clients is very similar, one to fifteen, but usually higher]

Medical science or science of Marketing ?

Nowadays though, the marketing is much more scientific – instead of being just made up on the spot it’s made up the spot and tested in swanky laboratories of market research houses on Madison Avenue.
That’s where phrases like “chemical imbalance” and the fancy technical sounding names for ailments that convince you that you need expert help from a Doc – access to special drugs. It’s also where they discovered the magic of the “disorder” word makes us believe we need experts in white coats;  and where names like “antipsychotic” and “mood stablizer” were revealed to make us think they do something specific, target some specific alien biological invader in our brain, when what they do is seize and bathe our whole nervous system.
Meanwhile the old snake oil medicines are now illegal, and available on a street corner near you – so long as you know who to ask. If you don’t know who to ask, phone you know who.

Your Doc, for all their hard work, training and smarts,  has been reduced to signing chits so you can get drugs that used to be sold honestly as poisons.  The pharma companies no longer need to lie or spin – they get your Doc to do it on their behalf. And they do it by being nice, buying lunch and listeneing to Doc talk about all eth patints comaplain about their woes and how it woudl be so much easier if only there were new drugs that treat them.

Your Doc likely doesn’t really know what the drugs do – and likely knows even less about the side effects.

Smart people can get duped too.

Become your own expert

You take the meds – you put them in your body: here at recoverynet.ca  we do not regard that as not a moral issue. We do, however, regard it as a matter in which you are likely better off if you take an active interest and get informed…

You might not want to take throat pastilles or forced march pills containing cocaine, or lozenges containing heroin…but at least you have the information so you can make an informed choice.

How today’s illegal drugs were marketed as medicines

Ernest Shackleton took this stuff to Antarctica in 1909, as did Captain Scott in 1910, but it was used in World War I, too.

For the treatment of coughs, bronchitis, phthisis, asthma, laryngitis, pneumonia and whooping cough.

We believe people can and do recover from "mental illness" - because we are living it. We believe in the power of supporting each other: learning from and with each other. You are welcome to join us..
View all posts by recoverynetwork:Toronto →
This entry was posted in learn about your medications, medication madness, The Mad Ones and tagged chemical imbalance, medications, psychiatric medications, Snake oil. Bookmark the permalink.
%d bloggers like this: