So much talk about mental health  is really just talk about about drugs.

Alas! poor disordered masses..
to take the drugs or not to take drugs, that is the question…..

At least that’s the question as some would like it .

Yet, “mental illness”- or whatever you call it –  is not really much about drugs at all.

Drugs can help, put a hold on things, create a bit of space so you can get some things sorted, space so antsy people around you can get off your back for a while.

But let’s get some things straight…

1. Psych meds do not fix a “chemical imbalance” in your brain

They never did, never will. They can’t – because that chemical imbalance is a made-up idea that is actually inside  your doc’s brain.
So, if your doc thinks his drugs will fix the chemical imbalance, good for them – have them  take the drugs.

If your doc says you have a chemical imbalance, then call them on it: go all in, ask for the river card and ask…

Lets get something straight – that chemical imbalance is five star b-rated:

Lets get some other things straight…

2. Pych meds do have an effect

We have all put stuff  in out bodies to make ourselves feel better – from blueberries, to  chocolate to, well, you decide how far you go.

Taking meds is not a moral issue.

Not taking meds is not a moral issue.
Its a choice.

Lying to people about chemical imbalances  so that they will take drugs is a moral issue.

So Doc, if you think lying to patients is the best way you can practice medicine then you really need to find a new career- try law or politics: you’ll do well.

3. People don’t hear voices because they don’t have enough pills rattling round inside em. 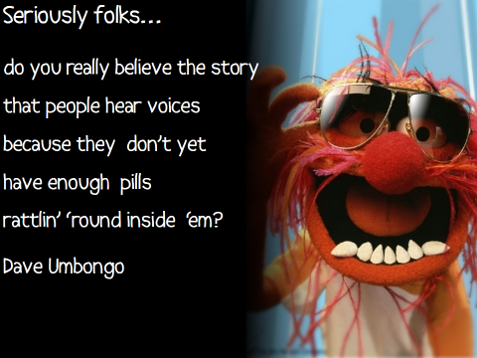 People don’t get ill because their body has an insufficiency of colourful little pills. They just don’t, alright?

If you really think that they do then I’ll have two of whatever you’re drinking.

And I want the umbrella and  sparkler.

4. Drugs can really mess you up 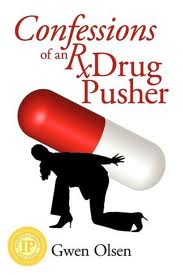 What you put in your body is your choice. Wherever you get your drugs, if you know more about what you’re choosing -what you’re putting in your body – then you’ll be better off.

5. Drugs might alleviate  symptoms, but don’t cure and they can’t fix lives

Psyche means soul- psychiatry means soul-healing. If your soul were nothing more than  chemical soup then drugs might do more than they actually can.

Drugs can make you feel better – eg help you sleep, help you feel less bothered by stuff that bothers you – at least for a while.

They might also make you feel less about everything else too, and you may not like that.

You might find that taking the drugs puts you at greater risk for heart disease, obesity, diabetes, and guess what? serious mental illness. Added bonus:  they can also shorten your life by 20 years.

You might decide you don’t want that but you’ll also need to decide what you are going to do. Take your time.

Drugs cannot fix whatever’s going on in your life that is making your life difficult, exhausting you and leaving you ill in the first place. Drugs can’t fix toxic relationships, a crap job, a bully boss, violence, the whole in your bank account or the one in your soul.

Only you can do that.

It takes time and you may need to learn some new skills and recruit help from good people, but you can.

5 Responses to psych meds and drugs – some straight talk