Posted on August 24, 2013 by recoverynetwork:Toronto 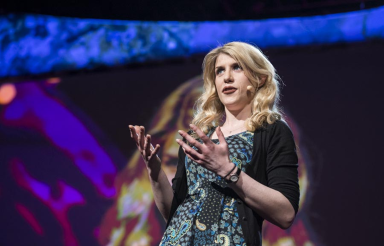 About ten percent of us hear voices. Any of us can at some point – especially around or after difficult life experiences. [eg about half of those in a long -term marriage will hear, see or otherwise sense the presence of their deceased spouse].

Some cultures regard it as a gift, or even normal – in some it’s those who don’t talk about the voices they hear who are regarded as troubled or strange.

Literature is filled with references to the voice in my head, Ray Bradbury said that “all writers hear voices – or they couldn’t do dialogue” and there are hundreds of songs.

So, why are we so scared of each other? we can’t blame it all on the church and movies and news reporting, it’s what we’ve come to believe…

You you may be surprised to learn that most people who hear voices are either ok with what they experience  or regard it as a good thing.
Do those of us who struggle all have broken brains ? or is it that our society makes it hard – really hard for those who do struggle by demonising them and telling them they are broken and incapable and need to be drugged them for life?

Well, that might work for some but for many it’s a prison that only compounds the trauma in an already traumatised life. Yet research shows that about eighty percent of people who struggle with their experience of voices have experienced distressing events in early life.

HEaring voices is not schizophrenia- yet most people who struggle with voices – especially in North America – will ge given that diagnosis even though the DSM includes fifty diagnoses that have voices as a diagnostic feature.
That a person o hears voices must have schizophrenia therefore requires drugs is the very kind of automatic thinking that is regarded by CBT therapists as aberrant and disordered and requiring correction.
Extensive research now shows that about 80% of people with diagnoses of serious mental illnesses have experienced distressing and adverse events early in life – and the more traumatising experiences and the more severe the experiences they have lived through,  then more severely they are affected. d’oh!

More, much more than this…

Isn’t it time we started to live up to our potential and offer not just drugs  but ways that  help people use their own resilience and creativity, to learn how they can live with whatever it is they struggle?

Eleanor’s story is one example of how that can work. In the Hearing Voices movement it’s what people do round the world. There is only one Eleanor Longden but there are many like her, and many stories like hers. There could be many, many more.

For people who hear voices, one of the hardest things to live with is the terror of what those around them will do if only they were to find out. You can imagine, I’m  sure, how this consumes a lot of energy and makes people ill.  So, if someone you know tells you they hear voices, steal yourself, get over your own fear and what you’ve been conditioned to believe – and just listen: really, really  listen, like you’re listening with your bones.

Maybe if  we can get over our fear of each other, then we can find ways to support each other in learning how to live with even the most difficult struggles a human life can bring – and in process maybe we can learn a thing or two about ourselves.

WATCH: Why I Thank the Voices in My Head

A New Voice In Mental Illness

A few months ago, a colleague of mine brandished an article in front of me with a rather bemused expression. “Read this!” he said, “I’d never have believed it.” It was a piece about a man who hears voices. Intrigued, I began to read:

“The voice is identified as Ruah… the Old Testament word for Spirit of God. It speaks in a feminine voice and tends to express statements regarding the Messianic expectation… It has spoken to me sporadically since I was in high school. I expect that if a crisis arises it will say something again. It’s very economical… It limits itself to a few very terse, succinct sentences… I have to be very receptive to hear it. It sounds as though it’s coming from millions of miles away.”

The reason for my colleague’s surprise wasn’t so much the content (he’s a psychologist and is well accustomed to accounts from people who hear things no one else can). Rather, it was who was relating their encounter with this “tutelary spirit” that surprised him. Because this wasn’t a report from a distressed, disorientated psychiatric patient; they were the words of award-winning, visionary author Philip K. Dick whose works, amongst others, inspired the movies Blade Runner and Total Recall. To me, this wasn’t particularly surprising; why shouldn’t someone of accomplishment and renown also happen to be a voice-hearer? But to my colleague it seemed to present a puzzling, almost unsettling, dissonance. And, to an extent, I can empathize with his surprise. After all, voice hearing is closely entwined with schizophrenia (with all the sinister connotations that this controversial diagnosis implies). And in the popular imagination, voices are commonly linked with derangement, madness, and mental corruption. As such, many contemporary voice-hearers inhabit hostile territory — it’s an experience that is literally marinated with fear, suspicion, and mistrust.

Over the years, my voices have changed, multiplied, terrorized, inspired, and encouraged. Today they are an intrinsic, valued part of my identity, but there was also a time when their presence drove me to delirious extremes of misery, desperation, and despair. — Eleanor Longden

Yet despite these florid associations, psychiatry has long recognized that voice hearing features in a range of non-psychotic mental health difficulties, particularly trauma-based conditions like post-traumatic stress and the dissociative disorders. Perhaps more unexpectedly, research also suggests that approximately 13 percent of people with no record of psychiatric problems may also report voice hearing at some point in their lives. In itself voice hearing is an absorbing topic — conjuring the nuances of perception and the nature of self — and has alternatively been feared, reviled, celebrated, and consecrated, and forensically scrutinized within such diverse specialties as psychology, neurology, anthropology, theology, medical humanities, and cultural studies. Furthermore, accounts of voice hearing have been documented throughout human history: recounted by a wide array of pioneers, geniuses, rebels, and innovators that span across the centuries — and also by normal, unexceptionable people like myself. You see, I’m a voice-hearer too.

It was the delirious, frenzied depths and exhilarating rewards of my own voice hearing voyage that would eventually take me to the Long Beach stage for TED 2013. Over the years, my voices have changed, multiplied, terrorized, inspired, and encouraged. Today they are an intrinsic, valued part of my identity, but there was also a time when their presence drove me to delirious extremes of misery, desperation, and despair. They brought me cringing and rocking to a psychiatric ward and pulled me down into the bleakest depths of madness; yet they would also lift me up to help me pass my University exams and ultimately elevate me to discover fundamental, healing truths about myself. The evolution of this understanding — and the remarkable privileges and terrible penalties it incurred — form the basis of my talk and accompanying TED book, Learning From the Voices in My Head.

Sharing my experiences so publicly could have felt overwhelming, but at every step the solidarity of friends and colleagues in the International Hearing Voices Movement fortified and sustained me. This organization has taken huge strides to reclaim voice hearing as a meaningful human experience; one which, for many of us, embodies figurative, emotional metaphors that communicate compelling information about pain and conflicts in our lives. This is not about pathologizing voices as symptoms; rather it is about understanding, accepting, and reclaiming them. In my own pilgrimage to recovery, it was learning to see the voices in more respectful, compassionate ways — as adaptations, survival strategies, and representations of emotional pain – that made my healing possible. After years of shame, horror, and heartbreak, I finally made peace with my voices which, fundamentally, meant making peace with myself. And it was this framework that empowered me to take to the TED stage; not as an ex-psychiatric patient with a ‘bad brain,’ but as a proud and maddened survivor with an assortment of valuable and valued voices. In fact, at the end of my talk June Cohen, one of the conference’s wonderful co-hosts, came onto the stage and asked me, with a respectful interest, whether I still hear voices. For a split second I hesitated, wondering whether to feign ‘normal’ and play it down with an airy “oh, not all that much now.” Instead I opted for the truth: “All the time,” I said cheerfully, “In fact I heard them while I did the talk… they were reminding me what to say!” Pride, empowerment, and the support to listen to one’s voices without distress should, I believe, be a natural right of everyone who hears voices. So too, the right to freedom, dignity, respect, and a voice that can be heard.

Ideas are not set in stone. When exposed to thoughtful people, they morph and adapt into their most potent form. TEDWeekends will highlight some of today’s most intriguing ideas and allow them to develop in real time through your voice! Tweet #TEDWeekends to share your perspective or email tedweekends@hufﬁngtonpost.com to learn about future weekend’s ideas to contribute as a writer.

We believe people can and do recover from "mental illness" - because we are living it. We believe in the power of supporting each other: learning from and with each other. You are welcome to join us..
View all posts by recoverynetwork:Toronto →
This entry was posted in hearing voices and tagged Eleanor Longden, hearing voices, mental health, schizophrenia, TED. Bookmark the permalink.