Posted on October 24, 2013 by recoverynetwork:Toronto

Doctors do this – some recognise it and some use a fancy name for it “diagnostic overshadowing”.  If you have a diagnosis you likely have been on the receiving end of it and you’ll know it doesn’t feel like “overshadowing” -whatever that would feel like.

What it does feel like is being disregarded as a person and treated as less than human.  If it were directed at any other group of people it would be illegal.

Essentially, once we’ve been put in a diagnostic box then everything we do, everything we experience, everything we think, or say, or feel,  is taken as  evidence of that diagnosis,  registered not as important information but as another tick in the box against the list of symptoms, confirming the correctness of diagnosis. Everything we say provides our “diagnostically overshadowing”-minded Doc with yet more mental ticks against us in his column headed “delusion”,  more in the column marked  “lacks insight”, all the while  reinforcing his “diagnostic overshadowing” of the person in front of him -you or me.

The doctors’ ears close and they stop paying attention to us, turning their  attention and focus to filling in the paperwork and grabbing a minute before meeting their their next walking/walk-in  diagnosis on legs on today’s long, long list. We are no longer treated  as person, simply the physical token of the dataset that counts against a nicely category in the databanks that churn the  supply chain that is this  medical-industrial-complex .

And because doctors do this, so  every other worker in mental health learns how: the practice diffuses til, by extension, a whole society thinks its ok to “diagnostically overshadow” people who have a diagnosis – because they are after all diagnosed, different, deficient: right?

Whether intentional or unintentional,  if it were directed at any other group then it would be considered wrong, unlawful, even illegal.

Instead, part of the deal that comes with a diagnosis of  mental illness you will also find yourself diagnostically overshadowed and bonus: you’ll also assigned blame for feeling  “stigmatised”.

Well, bollocks to you and your “diagnostic overshadowing” and your “stigma” – for they are not my burden,  but yours.

It’s time to call it what it is: plain and simple…. discrimination. 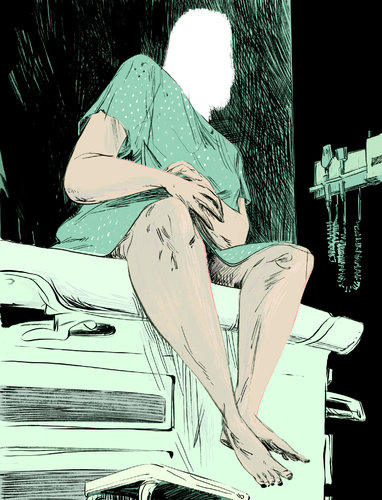 The first time it was an ear, nose and throat doctor. I had an emergency visit for an ear infection, which was causing a level of pain I hadn’t experienced since giving birth. He looked at the list of drugs I was taking for my bipolar disorder and closed my chart.

“I don’t feel comfortable prescribing anything,” he said. “Not with everything else you’re on.” He said it was probably safe to take Tylenol and politely but firmly indicated it was time for me to go. The next day my eardrum ruptured and I was left with minor but permanent hearing loss.

Another time I was lying on the examining table when a gastroenterologist I was seeing for the first time looked at my list of drugs and shook her finger in my face. “You better get yourself together psychologically,” she said, “or your stomach is never going to get any better.”

If you met me, you’d never know I was mentally ill. In fact, I’ve gone through most of my adult life without anyone ever knowing — except when I’ve had to reveal it to a doctor. And that revelation changes everything. It wipes clean the rest of my résumé, my education, my accomplishments, reduces me to a diagnosis.

I was surprised when, after one of these run-ins, my psychopharmacologist said this sort of behavior was all too common. At least 14 studies have shown that patients with a serious mental illness receive worse medical care than “normal” people. Last year the World Health Organization called the stigma and discrimination endured by people with mental health conditions “a hidden human rights emergency.”

I never knew it until I started poking around, but this particular kind of discriminatory doctoring has a name. It’s called “diagnostic overshadowing.”

According to a review of studies done by the Institute of Psychiatry at King’s College, London, it happens a lot. As a result, people with a serious mental illness — including bipolar disorder, major depression, schizophrenia and schizoaffective disorder — end up with wrong diagnoses and are under-treated.

That is a problem, because if you are given one of these diagnoses you probably also suffer from one or more chronic physical conditions: though no one quite knows why, migraines, irritable bowel syndrome and mitral valve prolapse often go hand in hand with bipolar disorder.

Less mysterious is the weight gain associated with most of the drugs used to treat bipolar disorder and schizophrenia, which can easily snowball into diabetes, high blood pressure, high cholesterol and cardiovascular disease. The drugs can also sedate you into a state of zombiedom, which can make going to the gym — or even getting off your couch — virtually impossible.

It’s little wonder that many people with a serious mental illness don’t seek medical attention when they need it. As a result, many of us end up in emergency rooms — where doctors, confronted with an endless stream of drug addicts who come to their door looking for an easy fix — are often all too willing to equate mental illness with drug-seeking behavior and refuse to prescribe pain medication.

I should know: a few years ago I had a persistent migraine, and after weeks trying to get an appointment with any of the handful of headache specialists in New York City, I broke down and went to the E.R. My husband filled out paperwork and gave the nurse my list of drugs. The doctors finally agreed to give me something stronger than what my psychopharmacologist could prescribe for the pain and hooked me up to an IV.

I lay there for hours wearing sunglasses to block out the fluorescent light, waiting for the pain relievers to kick in. But the headache continued. “They gave you saline and electrolytes,” my psychopharmacologist said later. “Welcome to being bipolar.”

When I finally saw the specialist two weeks later (during which time my symptoms included numbness and muscle weakness), she accused me of being “a serious cocaine user” (I don’t touch the stuff) and of displaying symptoms of “la belle indifference,” a 19th-century term for a kind of hysteria in which the patient converts emotional symptoms into physical ones — i.e., it was all in my head.

Indeed, given my experience over the last two decades, I shouldn’t have been surprised by the statistics I found in the exhaustive report “Morbidity and Mortality in People with Serious Mental Illness,” a review of studies published in 2006 that provides an overview of recommendations and general call to arms by the National Association of State Mental Health Program Directors. The take-away: people who suffer from a serious mental illness and use the public health care system die 25 years earlier than those without one.

True, suicide is a big factor, accounting for 30 to 40 percent of early deaths. But 60 percent die of preventable or treatable conditions. First on the list is, unsurprisingly, cardiovascular disease. Two studies showed that patients with both a mental illness and a cardiovascular condition received about half the number of follow-up interventions, like bypass surgery or cardiac catheterization, after having a heart attack than did the “normal” cardiac patients.

The report also contains a list of policy recommendations, including designating patients with serious mental illnesses as a high-priority population; coordinating and integrating mental and physical health care for such people; education for health care workers and patients; and a quality-improvement process that supports increased access to physical health care and ensures appropriate prevention, screening and treatment services.

Such changes, if implemented, might make a real difference. And after seven years of no change, signs of movement are popping up, particularly among academic programs aimed at increasing awareness of mental health issues. Several major medical schools now have programs in the medical humanities, an emerging field that draws on diverse disciplines including the visual arts, humanities, music and science to make medical students think differently about their patients. And Johns Hopkins offers a doctor of public health with a specialization in mental health.

Perhaps the most notable of these efforts — and so far the only one of its kind — is the narrative medicine program at Columbia University Medical Center, which starts with the premise that there is a disconnect between health care and patients and that health care workers need to start listening to what their patients are telling them, and not just looking at what’s written on their charts.

According to the program’s mission statement, “The effective practice of health care requires the ability to recognize, absorb, interpret, and act on the stories and plights of others. Medicine practiced with narrative competence is a model for humane and effective medical practice.”

We can only hope that humanizing programs like this one become a requirement for all health care workers. Maybe then “first, do no harm” will apply to everyone, even the mentally ill.

The author of the novel “Too Bright to Hear Too Loud to See” and a co-editor of “Voices of Bipolar Disorder: The Healing Companion.”

We believe people can and do recover from "mental illness" - because we are living it. We believe in the power of supporting each other: learning from and with each other. You are welcome to join us..
View all posts by recoverynetwork:Toronto →
This entry was posted in rant, Stigma begins with D and tagged discrimination; diagnostic overshadowing, Health, mental health. Bookmark the permalink.

5 Responses to When Doctors Discriminate