Posted on January 23, 2015 by recoverynetwork:Toronto

Spot-on opinion piece by Rosie DiManno on the power-addicted bureaucrats in charge of The Purple Empire – the totalitarian mini-state that is CAMH – who’ve instituted a new inquisition to take away the one thing that many patients finds actually helps them soothe and calm their own pain – a smoke.

Another example of how power goes to people’s heads.

The pettiest bureaucrats stop us taking the drugs that we like because they actually help – and then use every instrument of state to force us to take the flavour of the week drugs they happen to be pushing this week.

And they call this  “healthcare”…

Let’s call it what it is: Bollocks.

The Centre for Addiction and Mental Health’s cigarette ban fails to realize how smokes can soothe a troubled patient.

Cigarettes are a crutch but for CAMH patients they do soothe and calm. 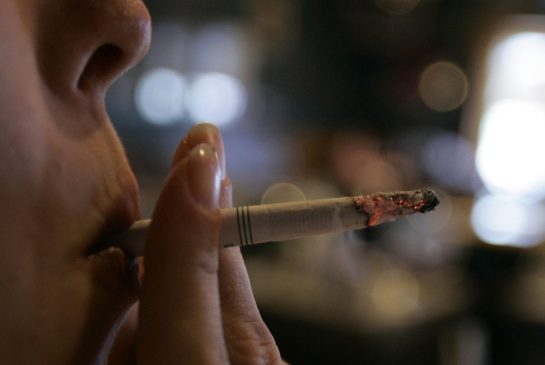 Some people, some institutions, are simply addicted to power. That is the irony of CAMH, which can wrap itself in a shroud of virtue. It exists to break individuals of their will, which is the pathology of addiction. They would never admit to their own pathology because they invented the language, they make all the rules, they can act as coercively as they please against some of the most vulnerable people among us and call it a matter of health.

As of April 30, keeping cigarettes — a legal product — in a patient storage locker will be forbidden. Any resident patient with off-site privileges who might wish to step outdoors for a puff — beyond the property, on the sidewalk, or across the street because smoking is not permitted on the grounds — would therefore have to buy a pack from a nearby convenience story each time the nicotine itch hits, then throw it away before re-entering.

CAMH includes smoke cessation programs on its mental health menu. But most people who end up at any of its three primary Toronto locations are not there because of a nicotine addiction. Their mental health issues are far more complex, often paralyzing. They are in crisis, fearful, fraying. A cigarette is indeed a crutch but it does soothe and calm. It is also, frankly, a pleasure and many of these patients have precious little in their lives to comfort the churning mind, the twitching hands, the racing heart.

From the very onset of provincial and municipal antismoking legislation, the one-size-fits-all ban was jackboot oppressive. It made no exception for exceptional circumstances — psychiatric facilities most particularly.

It is institutional bullying against frail, emotionally and psychologically brittle souls. CAMH has taken this crusade to appalling lengths. A cigarette, any nicotine product, is no less contraband than a switchblade knife, a crack pipe or a bottle of hooch. A memorandum circulated by Kim Bellissimo, human resources vice-president, stipulates that a “Tobacco Free CAMH” includes “removing the inpatient tobacco storage lockers at all CAMH Sites.”

Tobacco becomes a “prohibited” item. Compliance — a chilling word much beloved by autocrats — is mandatory. Unable to store their tobacco in lockers, doubtless some patients will seek other means to keep their smokes close by, making (rightfully) paranoid lawbreakers out of impotent men and women, victimizing people who are largely incapable of advocating for themselves.

They’re so easy to browbeat, the mentally fragile, to metaphorically lobotomize via needlessly and heedlessly harsh regimens. Offenders who don’t fly straight will face consequences, to the point — if it comes to that — of exile. That’s not therapy; it’s brute force.

“We’ve been trying to address this for 10 years,” argues Dr. Peter Selby, chief of the addictions division at CAMH.

Selby asserts that tobacco manufacturers “specifically target the mentally ill in their advertising” — smoking for the stupid is how the campaign has been characterized in industry literature, he says. In fact, tobacco companies can’t advertise their products at all, nor even sponsor sports and entertainment events in most countries. Those Mad Men days are over.

Selby tries a different tact: “Our patients die 25 years before the rest of the population. It’s tobacco that accounts for the lion’s share of those deaths. We, as mental health professionals, said: ‘Wait a minute. We’re helping our patients get better mentally but they’re dying right in front of our eyes.’ ”

Well, we’re all dying, right in front of each other’s eyes. But in the moment — for today, this week, these months, perhaps many years ahead — it’s the coping with life, as best we can under circumstances so fraught with pain and despair that we’ve landed in a mental hospital, which is the immediate trauma. A psychiatric institution should not be in the business of further traumatizing those who are already suffering, and certainly not by all but criminalizing an off-premises smoke break.

Selby sounds genuinely upset when he describes patients “picking up cigarette butts from the sidewalk” out front. What’s more stunning is that an expert in addiction could look at that scene and see only the addiction, not the need, not the gentling of other compulsions, not the blessed momentary relief.

By his own admission, most CAMH patients are not there because they want to quit smoking. They’ve fallen apart, lacerated by the struggle of existence. They’re sad and shattered and angry and overwhelmed. Some are drug addicts, some are alcoholics. All need help and compassion, therapeutic intervention, a temporary refuge from the inner storm.

They’re not smoking in their rooms. Their smoke lounges were removed in 2003. It’s the institution employees who don’t like walking through “a wall of smoke” to get into the building and complained about it to the Ministry of Labour. From smoke-free to empty your pockets to empty your lockers.

We believe people can and do recover from "mental illness" - because we are living it. We believe in the power of supporting each other: learning from and with each other. You are welcome to join us..
View all posts by recoverynetwork:Toronto →
This entry was posted in Crazy World, sh!t is f#cked and tagged purple empire, smoke, Trauma. Bookmark the permalink.
%d bloggers like this: