The man who lives in an aural world…

Posted on October 21, 2015 by recoverynetwork:Toronto 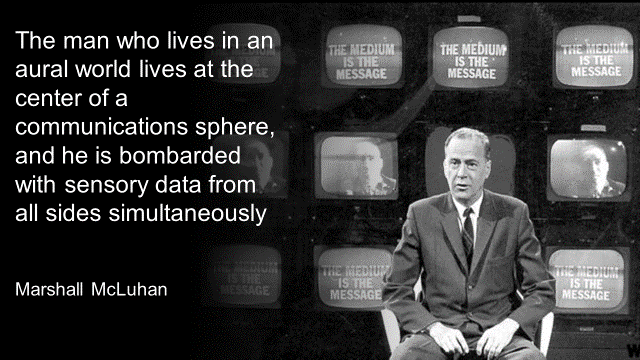 What does McLuhan mean in an aural or acoustic world ? he is not refering merely to the sense with which we detect but the structure of how we experience information –

visual space mimics the eye – and how it moves from one thing to the next [at great speed] and information comes to us sequentially, much like the symbols you are reading right now.
audio space is one in which, like sound – information comes from all directions and sources simultaneously.

Four hundred and more years of print created a new, visual world. McLuhan saw the beginning of an age in which technology transforms our experience again – this time returning us to primal, he called it “tribal” world with an audio structure in which we are all bombarded simultaneously with messages accessed through multiple senses…

Our role, amidst the noise of that, is to learn ways we can make sense of what we experience.

The following is from the Canadian Library and Archive:

While Innis developed his analysis of media according to time- and space-bias, McLuhan developed a slightly different categorization of media. Depending on which senses are engaged by a given medium, the resulting environment will either produce a visual or acoustic space. These concepts have less to do with specific media than with the kinds of effects they produce. So, for instance, McLuhan considers television audile-tactile precisely because it engages several senses at the same time: it creates an acoustic space. Since each sense interacts with others, when one sense is extended, the ratio of the other senses is also affected. McLuhan’s term “sensorium,” borrowed from Thomas Aquinas, refers to the senses in interaction with one another. 15

Visual space is characterized by an emphasis on the eye, or geometric vision. Media that stress this type of vision, like the phonetic alphabet or print, alter our way of perceiving the world by stressing linearity. Technologies that emphasize the eye over the other senses produce the impression that things in a visual plane are connected in the same way that, when you read, words build on each other by following rules of grammar and logic. These rules are the product of a way of thinking that links things that otherwise do not necessarily have any connection. This tendency, to link things together, presupposes that things are made up of parts. To understand the whole, and the connections therein, you must dissect the parts; hence, objectivity becomes a value. This is the predominant form of most industrialist technologies, such as steam power, reading and writing.

The key characteristic of acoustic space is that it engages multiple senses at the same time. It does not demand that objects be dissected to be understood; rather, the multiple parts co-exist simultaneously. To understand acoustic space, you must perceive all of it, not focus on one part. In other words, acoustic space demands that you apprehend figure and ground simultaneously, that the senses work together. McLuhan believed that oral cultures existed in acoustic space since their primary mode of communicating was speech.

Some scholars have observed that McLuhan’s use of the terms visual and acoustic space are idiosyncratic. 16 Most agree that geometric vision involves more interplay than McLuhan seems to recognize, making his use of the term appear somewhat arbitrary. Furthermore, visual space is not always associated with physical vision. Although print is typically associated with linearity and visual space, McLuhan considers some literature to be tactile, like the poetry of Eliot. Art that relies on perspective is associated with visual space, but cubism and the work of artists like Cézanne is considered to be acoustic since it requires an appreciation of both figure and ground.

We believe people can and do recover from "mental illness" - because we are living it. We believe in the power of supporting each other: learning from and with each other. You are welcome to join us..
View all posts by recoverynetwork:Toronto →
This entry was posted in Crazy World, hearing voices, Ideas, Learning and tagged acoustic space, aural space, McLuhan. Bookmark the permalink.
Loading Comments...