The brain is a social organ – Dan Siegel

Posted on July 7, 2016 by recoverynetwork:Toronto

Dr Daniel Siegel talking about how he started out as a scientist, trained as a clinician, became a teacher – always excited to learn as much as he could about the mind. 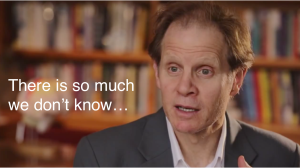 … of how as a scientist he came to realise we have to say:

“there is so much we don’t know” 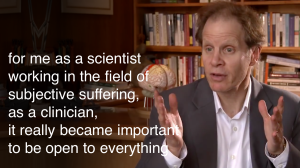 “for me as a scientist working in the field of subjective suffering, as a clinician it really became important to be open to everything”

… of how was using the word mindfulness in a book about parenting to talk of ideas about being intentional before discovering a whole mindfulness community that overlaps with spiritual community..

“I don’t know what spirituality is because I’ve never used the term before, please teach me..” 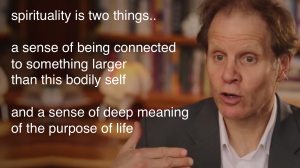 Invariably they say would say the same thing…

Spirituality is two things…
A sense of being connected to something larger than this bodily self
and a sense of deep meaning of the purpose of life. 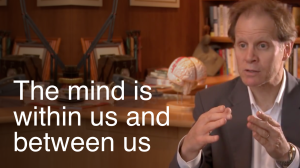 The mind is within us and between us.

For now, the classic “scientific ” statement is ‘The.mind.is.what.the.brain.does’ 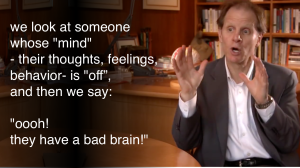 “we look at someone whose mind – their thoughts, feelings, behaviour- is “off” and then we say “oooh! they have a bad brain!” 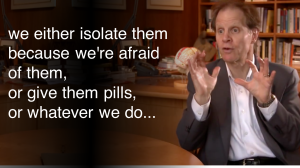 solate them because we’re afraid of them, or you give them pills, or whatever you do… 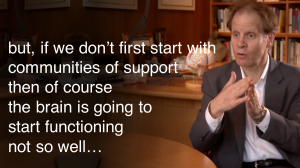 “but if you don’t first start with communities of support then of course the brain is gonna stop functioning so well, 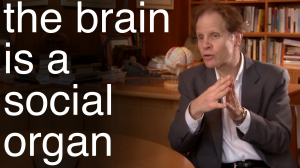 ‘the brain is a social organ

and that difference in how we view it is all the difference because we take responsibility for each other, 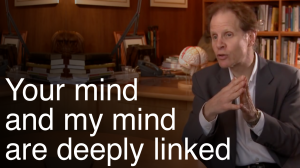 because your mind and my mind are deeply linked ..

and that’s the nature of humanity

Dan Siegel
Clip from interview with Phil Borges for his Crazywise prohject.

We believe people can and do recover from "mental illness" - because we are living it. We believe in the power of supporting each other: learning from and with each other. You are welcome to join us..
View all posts by recoverynetwork:Toronto →
This entry was posted in Emancipate yourself..., Healing, Ideas, making sense of "mental illlness", neuroplasticity, recovery perspectives, spirit and tagged attachment, Brain, connection, Daniel Siegel, meaning, social organ, spirituality. Bookmark the permalink.
%d bloggers like this: