Mulder, the internet is not good for you

Posted on February 3, 2016 by recoverynetwork:Toronto 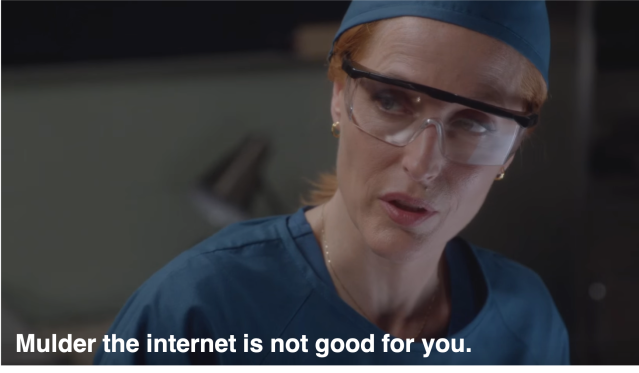 X Mulder and Scully Meet the Were Lizard
X-Files is back!
And how!

Mulder finds that everything the unexplained is now explained many times over on something called he Internet – and if its not a hoax or student prank, it’s just ice.

Now middle aged Mulder has a bit of an existential man-crisis – all the fun has gone out of investigating conspiracies, UFOs and the like – and especially, monsters.

Having been awakened to his new humanity he finds he now has a compelling urge to go out and get a job, so he can get a mortgage – whatever that is.

He needs no skills or qualifications – he now possesses the single evolutionary advantage humans have over all other animals – the ability to BS his way through any situation.

He feels compelled to lie about his sex life.
And, having been driven to get that job, he hates his job.

Unhappy, he goes to see a “witch doctor” – a psychiatrist
who advises him to go for walks in the cemetery-
to assuage all his anxieties by reminding himself it will soon all be over
when death comes to him too.

Then someone takes  his dog.

If you want some context here’s the scene.
If you just want the line then go to about 1:00 in.

We believe people can and do recover from "mental illness" - because we are living it. We believe in the power of supporting each other: learning from and with each other. You are welcome to join us..
View all posts by recoverynetwork:Toronto →
This entry was posted in Crazy World, Ideas, sh!t is f#cked, The Mad Ones and tagged Mulder, Scully, Were lizard. Bookmark the permalink.