Posted on February 22, 2016 by recoverynetwork:Toronto

Its a tough gig being a kid – hard enough learning to how  live in this bizarre and confusing world without parents that are so anxious they find it difficult to give you space to experiment, learn, fall down and fail now and again.

Walk past a school at recess – that’s if they get recess, many don’t – and notice also how it used to be called “play time” at least when I was at school – and you’ll hear kids determined to have fun.
Yet,  over that, you’ll hear the voice of the theme park kids inhabit:”Adultworld”.
That Orwellian BigBrother tinny tannoy voice of adult doom and gloom broadcast from the rooftops and that emanates from the incubation chamber of fear conditioning: “The Office” where fun is monitored and snuffed out as soon as it begins, via CCTV.

That metallic, robotic,  booming dis-embodied, dehumanised voice “do not pick up things up”,  DO NOT this, Do NOT that ,  DO NOT…,  DO NOT…. DO NOT….

What kind of Skinner-Pavlovian world of fear programming we have created in which we expect kids to grow up in – all in order assuage our anxieties, Yet this is only the prelude – soon we go on to diagnose them with all kinds of made-up- maladies that provide rationalisation-enough for drugging more and more of them – and  all so that we can feel like the perfect parents we’re pressured to be.

No wonder they look at us like we’re a few sandwiches short of a picnic.

Well these kids at least are  tired of being wrapped in bubblewrap – so they wrapped themselves in bubblewrap to make a point – to show all parents how bloody daft that is.

– and then they might end up just as scared as their parents.

“If you’re not allowed to do something, you don’t learn, if you fall, how to get back up. There’s a lot of things you can learn by having the experience yourself.”

Kids ask adults to back off, give them freedom to fall down, make mistakes

Not long ago, a group of Kingston kids went tobogganing decked out in eye-catching gear. On top of their parkas and boots, they were shrouded in layers of bubble wrap and covered in “Fragile” warning labels.

Then they captured their adventures on film. (No one got hurt.)

In case you don’t get their point, the bubble-wrapped kids explain it in their seven-minute video about overprotection, launched yesterday as part of a project called Child Health 2.0 at Queen’s University.

In a nutshell, adult fears about safety, risk and letting kids experience adversity is out of control, they conclude.

Let us fall down occasionally! Let us make mistakes and learn from them! And please, they urge, allow us the opportunity to try and fail.

“Are we losing something by being so careful?” one of the narrators wonders aloud. 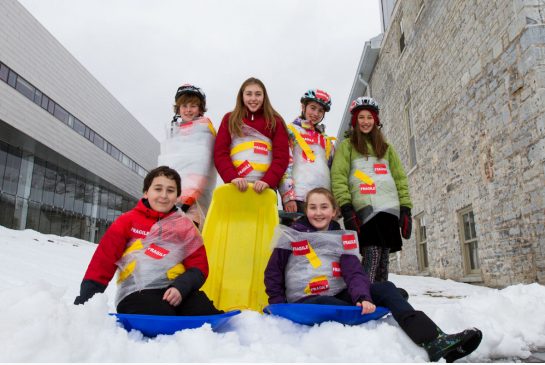 Clockwise from bottom left: Adam Tibi, Cameron Hostetler Keates, Catriona Farquharson, Isobel Moore, Arwen Robinson and Lily (who did not have permission to give her last name) made a six-minute video wearing in bubble wrap to show how over-protective some parents are.

The pushback against helicopter parenting has been growing among psychologists and researchers. But the message has a special clout coming from the kids themselves, who are members of the project’s youth advisory panel.

The panel of eight students, grades 7 through 10, was launched “to give kids a voice” about their own health, says Valerie Michaelson of Queen’s School of Religion and one of three public health experts leading the project.

This is a generation raised with no balls in the schoolyard and no climbing trees. It’s an era when adults step in to save them from failing, and kids get trophies for showing up at soccer matches where no one keeps score. They’ve been under surveillance since their first baby monitor and are always in texting range in case called upon to make a decision.But they have opinions on all of it.

“I think you have to fall at some point,” says one of the girls after the group learns about balancing safety and risk at a climbing park.

That’s how you learn to get back up again, or not go so high the next time.

“It’s OK to fail sometimes cause you can learn from it,” says another.

During the course of the documentary, they collect examples from all over the country of over-the-top restrictions and rules they say are hindering kids’ growth, physical activity and learning.

They consult a roundtable of experts, including a psychologist, emergency room physicians and a teacher, to talk about the impact of all this overprotection.

They learn it breeds anxiety and kids who aren’t learning how to negotiate their own boundaries — which could be setting them up for trouble down the road when there’s no one there to do it for them.

When they heard that cities like Hamilton had banned tobogganing, the panel couldn’t resist the idea of dressing in bubble wrap to drive home their point. (They also considered donning life jackets and sitting in the bottom of a pool that had been drained.)

“If I just do nothing it gets boring,” Adam Tibi, 13, explains on film. “You’re safe but what’s the point — you’re just sitting around existing?”

Most kids he knows are eager to push themselves and try new things, Adam said.

“If they’re kept inside this tiny little box it’s going to prevent them from being creative and independent so when they grow up they’re not going to have these tools they need.”

The Child Health 2.0 project, funded by the Canadian Institutes of Health Research, is a holistic initiative that explores the physical, mental, social and spiritual realms of kids’ health with input from families and youth.

What children say about being free from bubble wrap:

Catriona Farquharson, 14: In elementary school, the teachers wouldn’t let you run around at recess if it was raining or play soccer if the field was wet or go on the play structure if it was a bit rusty. I think it set a lot of kids back. That’s when they’re supposed to be getting exercise and they don’t know what to do if they can’t do any of that.

Adam Tibi, 13: I remember a science exam that I got a very poor grade (on). After that I studied for a very long time and I boosted my grade up by a lot. That was a learning experience for me, that I need to study more and be more independent. Even though I felt really horrible, now I feel really good and I know how it’s done.

Isobel Moore, 12:  My mom let me climb trees if we were together. I’ve fallen, but never from a high height and I never got seriously hurt. I think I learned the difference between a safe, healthy risk and a risk when you actually could get seriously hurt and it’s not smart.

Arwen Robinson, 12:If you’re not allowed to do something, you don’t learn, if you fall, how to get back up. There’s a lot of things you can learn by having the experience yourself. The message we’re trying to get out is if you’re going to make a new rule or ban something, think about how this is going to affect kids in the long run.

Kids ask adults to back off, give them freedom to fall down, make mistakes

We believe people can and do recover from "mental illness" - because we are living it. We believe in the power of supporting each other: learning from and with each other. You are welcome to join us..
View all posts by recoverynetwork:Toronto →
This entry was posted in be awesome, Crazy World, resilience and tagged bubblewrap, fail, Kids, learn, parents. Bookmark the permalink.
Loading Comments...