Posted on March 3, 2016 by recoverynetwork:Toronto

If you’re one of the hundreds who saw the post on Total Isolation, about  the BBC Horizon episode reproducing an experiment into the effects of solitary confinement, then you’ll understand. If you haven’t seen it yet, you can find it here:

UN’s Special Rapporteur has called solitary confinement – or “segregation” as its called in both prisons and hospitals  both “punishment“, and “torture” and  called for it to be used in only the most strictly controlled est of circumstances.
Solitary confinement of over 30 days consecutively is regarded as cruel and unusual punishment in international law.

Toronto Star has been reporting this week on extent that Ontario jail system makes routine use of segregation, solitary confinement, isolation, torture  – often for people already suffering with  “mental health problems”.
Well, if they weren’t before, they soon will.

Ontario Corrections Services only “disclosed” the data as part of a court case – in other words because they were made to.

Well, now Ontario’s Human Rights Chief Commissioner Renu Mandhane has called for its end, citing that it is applied disproportionately to minorities, especially those who have been racialized, have mental health disabilities, and women…

Well, guess what? Put them all together and those minorities make a majority.

So whichever minority is doing it to the majority of us- don’t you think it’s about time you stopped? eh?

And,  whilst this particular issue focusses on the case of segregation applied in prisons, it also happens in hospitals.

And segregation in a less specific, larger sense also applies in greater society when we segregate and isolate people – or treat them so that they become isolated – and it has the same effect.

And yet, even as they struggle we further segregate separate and isolate them by blaming them [and their genes and their brains] for struggling because of how we treat them.

How mad is that?

“We believe that it has a discriminatory and disproportionate impact on … racialized individuals, people with mental health issues and women,” said Chief Commissioner Renu Mandhane. 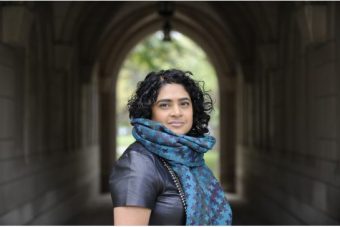 Renu Mandhane, chief commissioner of the Ontario Human Rights Commission. has asked the province to commit to ending solitary confinement.

The Ontario Human Rights Commission is calling for an end to the use of solitary confinement in provincial jails.

Chief Commissioner Renu Mandhane has asked the province to commit publicly to ending the practice and immediately restrict its use.

“We believe that it has a discriminatory and disproportionate impact on code-protected groups — namely, racialized individuals, people with mental health issues and women,” said Mandhane, who joined the commission in November.

Mandhane, an expert in international human rights law, said solitary confinement is often used to manage offenders with mental health disabilities, and the practice must stop.

“Because segregation is an option, it has not put pressure on the prison structure to create other forms of dealing with the complex needs of some of the prisoners in the population,” she said.

The recommendations, which the Star obtained ahead of their Monday release, came out of a request from the Ministry of Community Safety and Correctional Services for the commission’s participation in a sweeping review of segregation practices across the province announced by Minister Yasir Naqvi last March.

The ministry has not responded directly to the commission’s call to end solitary confinement. Naqvi was not available for an interview due to the recent birth of his second child. His spokeswoman, Lauren Callighen, said the ministry will continue to work with the commission as it updates policies and continues efforts to transform the correctional system.

“We know that segregation can be emotionally and mentally distressing and individuals who suffer from mental illness are particularly vulnerable,” Callighen said in a statement. “Our goal is that segregation will only be used as a last resort, when all other options have been exhausted.”

The segregation review, which Callighen said the ministry hopes to complete by the end of the year, will “evaluate policies, practices and procedures, identify areas for change, and examine best practices in other jurisdictions.”

The ministry has faced growing criticism over solitary confinement in Ontario jails, which comes amid mounting national and global concern about the mental health consequences of isolation. The review came after a string of Star stories that documented alleged human rights violations in provincial jails.

A United Nations special investigator has said solitary confinement should be used only in exceptional circumstances and never for people with mental disabilities or for more than 15 consecutive days, or it could amount to torture. Howard Sapers, Canada’s federal prison watchdog, has pushed for it to be banned for inmates with the diagnosis of a serious mental illness or a history of self-injury, and his office has called solitary confinement the “most austere and depriving form of incarceration that the state can legally administer in Canada.”

Mandhane said the commission’s position — an end to the practice in Ontario — is intentionally strong because removing segregation as an option would force the province to change the way jails operate.

“What we hope would happen is that you’d see more resources put into prisons to deal with people who have mental health issues, so that you’re actually treating the underlying cause,” rather than “just locking them up and throwing away the key,” she said.

“We need a culture shift in terms of how we deal with racialized groups, indigenous women and prisoners with mental health issues. And for too long we have used what I think is the most punitive thing we can do in our entire correctional system . . . to deal with these disadvantaged groups.”

Mandhane said the commission isn’t naive enough to think an end to solitary can happen overnight, but said the ministry could minimize the impact of segregation by immediately implementing its recommendations.

We believe people can and do recover from "mental illness" - because we are living it. We believe in the power of supporting each other: learning from and with each other. You are welcome to join us..
View all posts by recoverynetwork:Toronto →
This entry was posted in mental illness? or..., sh!t is f#cked and tagged Isolation, Solitary confinement. Bookmark the permalink.