Posted on March 11, 2016 by recoverynetwork:Toronto

A big thank you to two very cool people reporter Verity Stevenson and photographer Marcus Oleniuk. And a big thank you to artist Dora Garcia for the inspiration, and of course to Sue and David, owners at Coffee and All That Jazz for creating the kind of space in which we can all be a little more human.

Monthly meeting helps those who hear voices talk about their experiences. 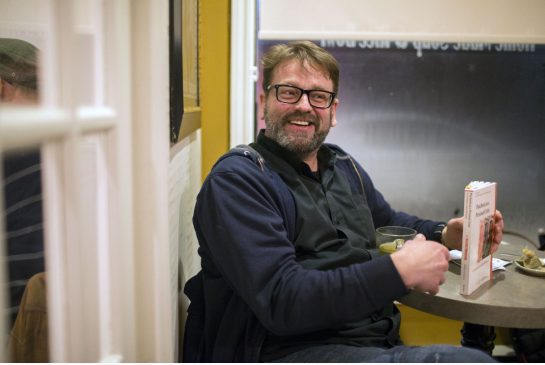 Kevin Healey at a monthly event at Coffee and All That Jazz in Roncesvalles where people who hear voices and those who work with/for them to talk about it openly, without fear of stigma and in a non-institutional environment.

There’s a coffee shop Kevin Healey visits nearly every day around the same time and stays for hours.

It’s a quaint nook just off Roncesvalles Ave. and it’s where he goes to work, and experience the bustle of a café. There, some of the voices he hears are of those around him and others are voices no one else hears.

For the past few months, it’s also been where he goes — and invites others — to talk about hearing voices.

The first Monday of every month, Healey has reserved the back of Coffee & All That Jazz for Hearing Voices Café, an informal gathering for people who hear voices, people who know those who do, or people who want to know more about the experience.

“I hear voices,” Healey told a group huddled in a corner of the café last month with a tee-hee.

The event, the first Healey has heard of in the country, is a spinoff from Hearing Voices, an international network that takes a holistic approach to mental health.

“I’m really interested in helping people help themselves,” said Healey, who says he hears about 12 voices. There’s one, Dave, that he can see, too, and for whom he’s created a Facebook page. “He has more Facebook friends than I do.”

Monday evening, seven participants crowded in the small section at the back of the bustling café, cut off by sliding French doors. One woman’s nephew hears voices, another’s cousin is struggling to come to grips with hearing voices, and a mother and her 20-year-old daughter attended, having recently met Healey.

There was a moment not long ago, she said, where she reckoned with the voices her daughter hears. After years of doctors telling the girl they aren’t real, the mother had a change of heart at a workshop held by Healey. When she got home, she handed her a button Healey had given her.

“The voices are real,” it read.

“It was this big ah-ha moment … her whole body changed,” the mother told the group of her daughter’s reaction. “They always just want to medicate her. It’s nice to hear other (perspectives).”

Where the initiative and the Hearing Voices network finds a niche is the notion, advocates say, that many doctors rely on drugs as one of the first resorts, while the network seeks to help participants look at the positive sides of their voices and explore underlying issues that may cause them to lash out.

“There’s an uphill battle to talk about more wellness-based, resilience-based initiatives — not just the medical model,” said Steven Hughes, a staff educator at the Centre for Addiction and Mental Health, who attended last month’s gathering.

“Voices have been kind of demonized and pathologized, and I think Kevin — this movement — offers a way of reframing the possibility that they might have strengths or possibilities. Not something that has to be avoided or suppressed,” Hughes added.

Healey says he believes meds serve a purpose for those who need them. You have to figure out what works for you and the more options, the better, he says.

We believe people can and do recover from "mental illness" - because we are living it. We believe in the power of supporting each other: learning from and with each other. You are welcome to join us..
View all posts by recoverynetwork:Toronto →
This entry was posted in Crazy World, hearing voices and tagged All That Jazz, Hearing Voices Cafe, Roncesvalles, Roncy, Toronto. Bookmark the permalink.